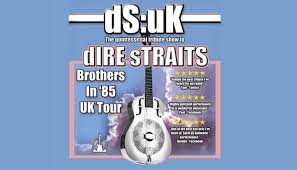 THE SHOW HAS BEEN POSTPONED UNTIL 25TH SEPTEMBER 2021

ALL TICKETS BOUGHT WILL BE VALID FOR THIS DATE

“dS:uK…in tribute to Dire Straits” began touring in 2016 and have quickly become regarded as *the* quintessential tribute

band among Dire Straits fans with their incredible attention to musical and sonic detail.

To say that “dS:uK” sound like Dire Straits is an understatement. Their 2020 “Brothers in 85” tour pays tribute to the worldwide Brothers in Arms tour, with the band bringing fans the ultimate 1985 Dire Straits experience and all of those classic songs that you want to hear.