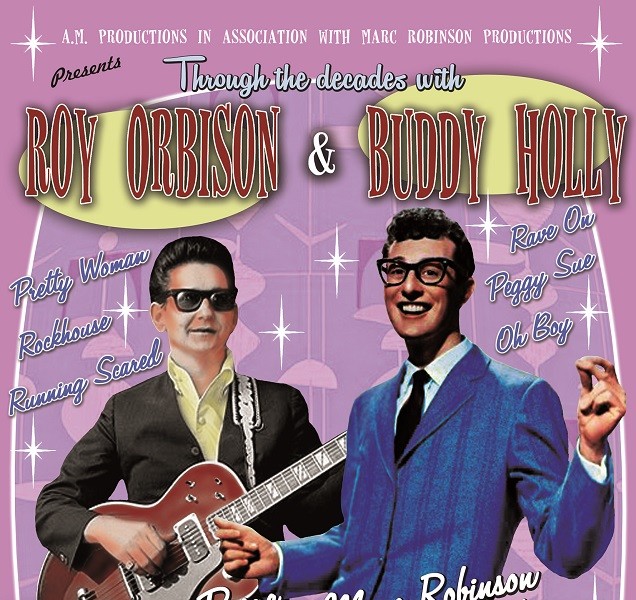 Roy Orbison and Buddy Holly both grew up in the same part of Texas. They recorded their earlier work in the Norman Petty Studios in Clovis, New Mexico, even at one point recording the same songs 'An empty cup’ (and a broken date) as well as ‘You’ve Got Love’ both written by Roy Orbison.

The two Artists brought a unique Texas influence into their music and through their creative writing for both an individual sound was born!

Roy Orbison went on to write so many songs including ‘Only the Lonely’ & ‘Crying’, and Buddy Holly in his short Career showed his writing talents would of gone on to match any songwriter in the world, which earned him a place (13th) in ‘The Rolling Stone’ ‘100 Greatest Artist of all Time’!

Darren Page’s vocal abilities have brought a reputation that always delivers a quality to entertain, but Darren’s secret love in music is Roy Orbison which sits very comfortable in Darren Page’s voice range.

Marc Robinson has played the part of Buddy Holly all over the world and all over Great Britain; he performed in ‘Buddy ‘The Musical and numerous other shows, with partners he founded ‘In Dreams & ‘Rockin on Heavens Door’, he also has many TV appearances to his name.

Marc’s latest show ‘Through the Decades with Roy Orbison & Buddy Holly’ will deliver a feel good factor with all the hits from…I Drove all Night, Mean Woman Blues, Pretty Woman, Heartbeat, Peggy Sue, It Doesn’t Matter Anymore & Raining in my Heart, to name but a few!

After playing in Europe and all over Great Britain Darren Page joined Marc Robinson, they both have dedicated their careers to Roy Orbison & Buddy Holly, this two-hour uplifting Rock n Roll Show is full of pure nostalgia with all their Hits and a few earlier ones too!

Will Rock n Roll ever Die?  That’ll be the Day!